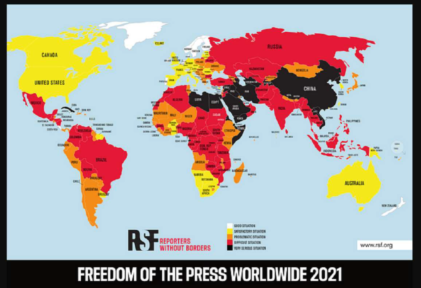 The Nordic countries top the global Press Freedom Index published 20 April by Reporters Without Borders. However, press freedom has deteriorated around the world, particularly in Europe.

Only 12 European countries can claim to offer a favourable environment for journalism, fewer than ever before. Germany, for example, dropped from the top group because of repeated violent attacks on journalists by extremists and conspiracy theorists. Norway remains at the top of the index.

The index reflects a dramatic deterioration in people’s access to information and an increase in obstacles to news coverage. The Covid-19 pandemic has been used as grounds to block journalists’ access to information sources and reporting in the field. The index shows that journalists are finding it increasingly hard to investigate and report sensitive stories, especially in Asia, the Middle East and Europe.

“It’s not just about freedom of expression, which is under threat from extremists and conspiracy theorists all over Europe, including in Finland. It is a threat to the entire democratic social order that is growing stronger every day,” says Jarmo Mäkelä, chairman of the Finnish chapter of Reporters Without Borders.

UJF president Hanne Aho said that the press freedom index reflects the state of democracy in the world.

“Press freedom and the public’s right to information is jeopardised by violence against journalists, extremism and conspiracy theories, including here in Finland.

“Although our ranking is still an excellent, second place, and Finland is among the few countries where press freedom is still well established, the situation in the world is deteriorating. We cannot wait for the situation to correct itself, but must act actively and quickly to improve press freedom.

“Freedom of the press is not a given, even in Finland.”

According to the Press Freedom Index, social media threaten the Finnish media in two ways: they take advertising revenue away from the newsroom media and at the same time provide a platform for disinformation and its spread.

But Reporters Without Borders finds that the Covid-19 pandemic has had a positive impact on the media environment, as public confidence in Finland’s leading media has increased, as has trust in verified factual information and science.