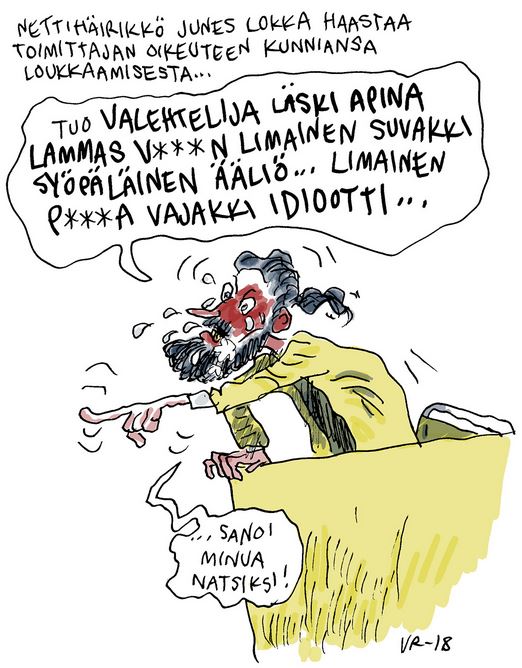 Help is on its way to journalist Johanna Vehkoo, who was ordered to pay a fine and court costs by Oulu District Court after convicting her of defaming far-right local counselor Junes Lokka.

The union is buying a cartoon of Junes Lokka by Ville Ranta for €7 588,80. This is the sum Vehkoo was ordered to pay for Lokka’s court costs. Vehkoo had referred to Lokka as a racist and nazi clown on a closed group Facebook post.

Ranta announced the sale of the cartoon last week, after the court verdict. He will donate the sum to Vehkoo to cover her legal costs.

Lokka has a history of referring to himself as a Nazi and of inciting hatred of immigrants and minorities in Finland, and of hounding Vehkoo, who has devoted much of her work to exposing fake news.

Ranta’s cartoon depicts a foaming-mouthed Lokka bawling expletives and insults. Ranta has said he will donate proceeds from the sale of the cartoon to cover Vehkoo’s costs.

UJF president Hanne Aho said that Vehkoo has long been a thorn in Lokka’s side. “The verdict seems disproportionate when you bear in mind the longstanding harassment and pressure Lokka has subjected her to.”

Aho stressed that the court verdict – which is subject to appeal – could further encourage trolls and other perpetrators of online abuse and to resort to litigation to harass journalists.