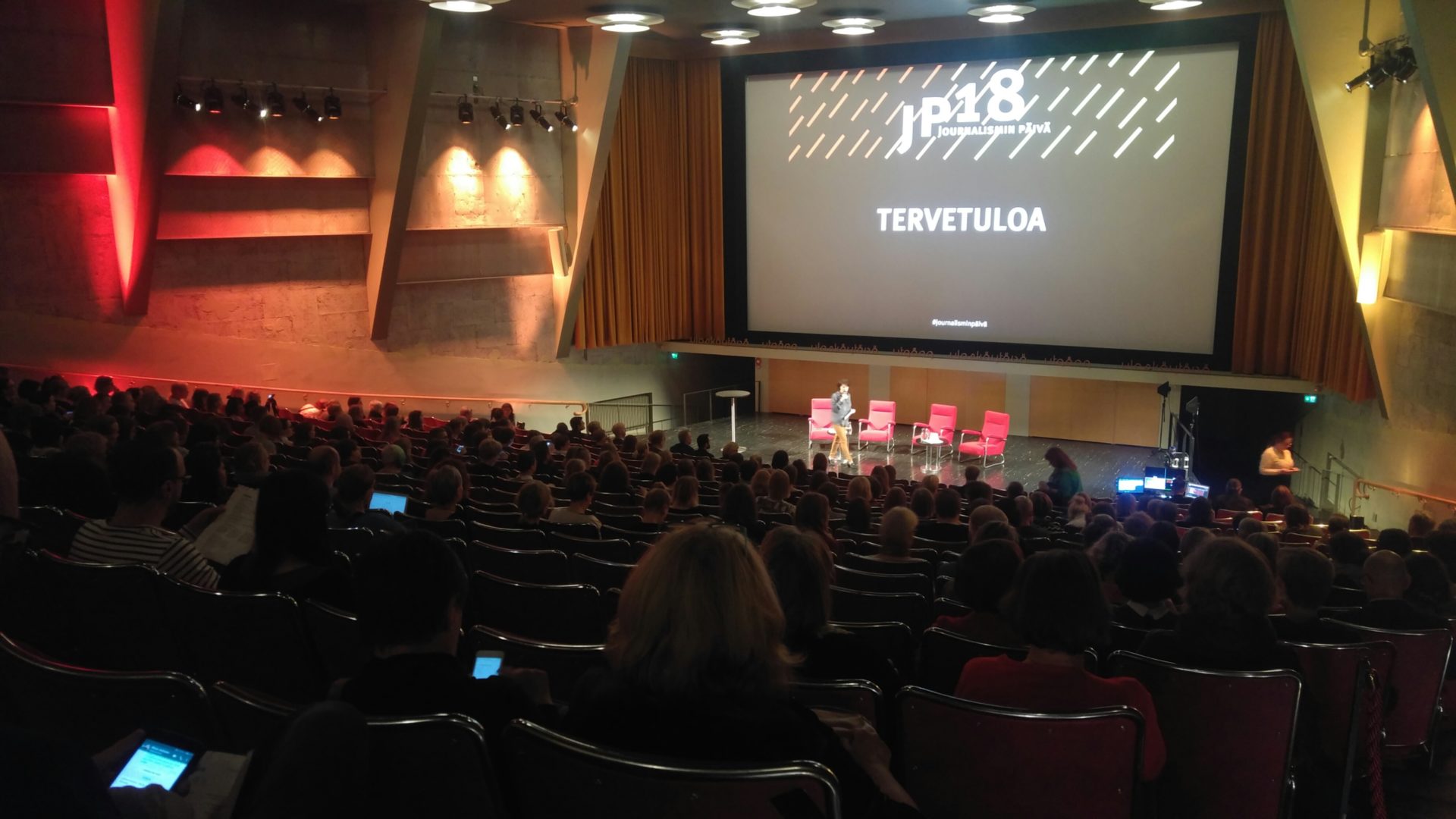 This year’s Journalism Day opened with a clarion call on journalists to pay close attention to the looming threat of climate change in their work.  From now on, whether a journalist is composing a story on housing, horse racing or stock market turmoil, the question, “what about the climate” should firmly be at the back of every journalist’s head, said Riikka Suominen, Chief Editor of Finland’s Green Party’s publication, Vihreä Lanka.

The fully-booked bi-annual Journalism Day event was held over the weekend, organized by the Union of Journalists in Finland (UJF). Like previous years, this year’s event – with tickets sold out two weeks before the day – brought together about 500 practicing journalists, journalism teachers and researchers.

Prior to the event, the Intergovernmental Panel on Climate Change (IPCC), the international body for assessing the science related to climate published its annual report on climate change, which gave a dire warning about the consequences of global warming if current human activities continue and do not halt the emission of greenhouse gases. Global temperatures would rise to 1.5 degrees Celcius above preindustrial levels already by 2040, IPCC warned.

Given this situation Suominen warned the captive audience in the full capacity auditorium that the report from IPCC offers no option for journalists to continue with business as usual.

“It means for all journalists, that we take the message from the science seriously; we are not serving our publics in the best way if we just deny or silence the fact of what is going in the world”, she said.

“What are we asking of you?” asked Lasse Leipola, also a journalist with Vihreä Lanka. And provides the answer: “Hardly anything, you do not need to change your work methods and you can continue writing stories on the same issues much as before; all we require from you however, is to give a one second reflection on whether the story you are writing has any bearing on climate change, said Leipola.

According to Leipola, climate change is not necessarily connected to everything and therefore one doesn’t necessarily need to squeeze it into every story. But if after every consideration, it turns out that the story would become better and more truthful if climate is considered, then it is worth including in the story.

As Suominen, put it, “one does not need to call to the meteorological department or to the Chairperson of the IPCC for every story”.

“We don’t need more climate change journalism”, she said, “instead we demand more journalism, which recognizes the biggest social change of our time”.

Suominen adds further, “we journalists must understand that the climate is changing along with everything else and that is why journalism too, must change”

This year’s Journalism Day was also attended by Google and Facebook, a departure from previous occasions where the world’s most powerful media giants were largely absent.

In a panel discussion titled, Whose Money, Whose Data – Future media horizons, Google’s representative Eero Korhonen, Head of News and Publishers at EMEA Partners, and John Severin Head of Media Partnership at Facebook and Instagram for the Nordics were placed under the spotlight to provide insight into their companies’ media operations.

In recent times the two companies have faced a public image crisis stemming from the rise of the fake news phenomenon and also from accusations for allowing third parties misuse their user’s information for political purposes.

Asked to what extent they would admit responsibility for the global media crisis, for which the two companies have been blamed, Facebook Severin, attributed it to a shift in user consumption preferences. While not denying the part played by digital publishing in the crisis, to him, Facebook and for that matter Google, were reacting to that change in customer behaviour.

“We listen a lot to our user feedback; we try to look at what their consumption patterns tell us is relevant”, said Severin. Adding, “we have realized people need to be informed, people didn’t sign up to Facebook to read news but they prefer to have news on Facebook”, he said.

The cumulative effect of having to enter into content production is that they have to compete for “eyeballs of attention”, as he put, by striving to produce more quality content.

Google’s mission has always been to organize the world’s information, according to Korhonen, but a similar logic of the need to serve its users’ preferences better has driven the company closer to publishers.

For instance, in 2015 Google launched the Digital News in Europe as way of establishing a continuous dialogue with news publishers, and that was a result of previous talks with the publishers where they had expressed the need for Google to consult them before launching a new product.

However, Korhonen tried to dispel fears that Google is in any way trying to influence journalism to suit its purposes. Instead, he said, “we wanted to stimulate innovation in the European news ecosystem”.

From negative to constructive journalism

While participants at the one day event heard concerns about the need to place climate change at the centre of journalism to reflect the changes that would wrought the world as a result, their attention was also drawn to continuous negative reporting of events in the media.

Negative reporting, according to Ulrik Haagerup, in his presentation, “is like a global disease everywhere and it is not getting better when it is digitalized”

Haagerup is a former director of news in Danish Television and now CEO of the Constructive Institute at Arhus University in Denmark.

With the help of statistics, Haagerup showed how numerous studies conducted in several countries have indicated the widespread distrust of news among the public. For instance, 73 per cent of German audience distrust news on refugees. And in some studies journalists are down there at the tail end with car dealers as the least liked professionals.

Journalism is filter between reality and the public perception of reality, said Haagerup, but unfortunately that gap is growing by the day in every country due to how news headlines on print and on the screen are increasingly portraying the negative.

The final by-product is that most people feel insecure, apathy takes over their lives and they withdraw from public debate or turn to be very selective in their news sources – not because of real danger in their immediate environment but because from the negative news that is widespread on nearly every news platform.

Constructive news on the other hand, is about “conceptualizing an idea that journalism could change; it is not necessarily about positive news based on North Korean version of journalism”.

After providing a negative feedback, which societies need in order to take corrective measures, the idea of constructive journalism is providing hope that something can be done about it after all, instead of starting and ending with negative news.