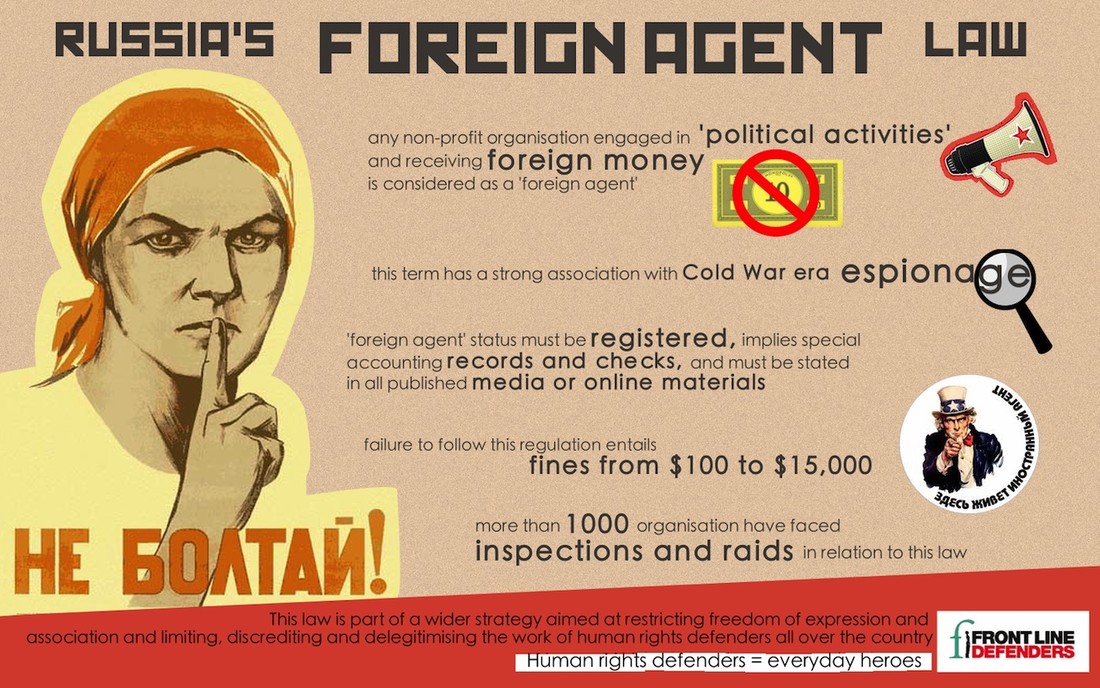 On December 25, Russian Duma approved a law that allows for ordinary citizens and informal organizations to be deemed “foreign agents” if they are involved in political activity in Russia and receive assistance from abroad.

The new law refers to more than just financial assistance and offers a broad interpretation of what constitutes political activity. What’s more, potential foreign agents are responsible for registering their status themselves and, under yet another law, failure to do so can threaten not only a fine, but also up to five years in prison.

Journalist Anna Kireeva says, “I personally know one of the five people who all of a sudden were branded “foreign agents” on December 28. The decision to include five people on this list has a truly chilling effect. This is a threat against anyone. It is not clear how the decision is made, which body actually decides on it, how to appeal it and whether it is possible to remove the name off the list.”

Anna explains that under the previous version of the law on foreign agents, it was necessary to prove that the organization operates without any foreign funding for one year to be taken off the hook. “As of now, it is all completely different as journalists do often write for media outside Russia and receive money for their work. Thus, the mere fact that you are a recipient of the payment for your article can be interpreted as “serving interests of a foreign state.”

Daria Apakhonchich is one of the first five “foreign agents”. She was shocked to learn about the label from the news. “Nobody had ever issued any warning, Daria tells talking via TG messenger, and I am not going to agree to be branded this way”.

Daria is an activist with peace and feminist movement from Saint Petersburg, and she is not a journalist. She is a teacher of the Russian language as foreign. Last summer she was detained during a street action in support of Julia Tsvetkova, a young artist from Komsomolsk-on-Amur who is facing charges of “promoting pornography” for her sketchy “body-positive” drawings. Daria recollects, “It was my moral obligation to stand up for Julia Tsevtkova as it happened so that she was detained right after her return from the art festival in Petersburg I helped to organize”. Just shortly before the decision on her being a “foreign agent”, Daria won a court case over the fine for participating in that summer action. She tells, “It is grotesque, but I was detained in August last year while the action for Julia was in July. The law requires that the apprehension protocol be compiled on the day of the event deemed illegal, but in my case, they broke all possible laws”.

Daria is not receiving any money when foreign journalists ask her for a comment, but she is still on the list of “foreign agents”. She now must introduce any single entry on her Facebook or Instagram with a lengthy disclaimer of it being created by an individual acting as a foreign agent.

Anna Kireeva says that feelings of Daria Apakhonchich are easy to understand, as the connotation of the term “foreign agent” in Russian is purely negative if not offensive.

Another “foreign agent”, Denis Kamalyagin, the chief editor of the “Pskovskaya Pravda” newspaper, sadly responds to my question of the most efficient help to people like him from abroad, “I doubt that anything or anyone could help us out”.

We communicate via Facebook messenger. Linkedln professional network is banned in Russia quite long ago. This fact and its negative impact are also reflected in the Barents Press guidebook.

Denis tells, “Entire 2020 was extremely difficult for us. Our two TG channels and Instagram were successfully hacked. There was an attempt to hack our Facebook and Twitter. We were issued administrative punishments for holding rallies in support of our fellow journalist Svetlana Prokopyeva.”

Svetlana, as the Committee to Protect Journalists describes her, is “a regional correspondent for the U.S. Congress-funded broadcaster Radio Free Europe/Radio Liberty”. In one of her broadcasts, Svetlana covered the case of a 17-year-old who blew himself up in the building of the FSB headquarters of Archangelsk. Svetlana was found guilty of justifying terrorism. Svetlana denies the charges saying that she was doing her job.

Sergei Markelov, a journalist from Karelia, was also shocked to be labelled as a foreign agent. He neither got any notification or a prior warning.

We communicated to Sergei on December 28, the day of the announcement. He told, “Actually, I am still unawares what to do next. I feel shocked likewise my entire family”.

I ask Sergei what he wrote about. He got the “Redcollegia” award for a reportage on how torture is applied in Uzbekistan. In 2018 he received the American award for his article on the project for people who suffer severe psychiatric disorders. To try his chances, Sergei submitted the article to the 2018 ICFJ Global Health Reporting Contest”. The third award Sergei got was from “Vmeste Media. Nord-West”, an internal Russian platform created in 2002 by the Foundation for Independent Radio Broadcasting. They marked Sergei’s article on the excavations in Sandarmokh.

Sergei does not know what triggered the decision to treat him in such a hostile way. Talking to him later, two weeks after the decision by Russia’s Justice Ministry, I asked how the situation is developing. He responds, “Nothing. No development whatsoever. I am waiting for the response from the Justice Ministry to my inquiry letter and is plunged into compiling a report, as the law requires from a “foreign agent”. Sergei insists that he refuses to admit himself to act as a “foreign agent”.

Lev Ponomaryov is a 79-year-old human rights and social activist who has been the leader of the For Human Rights Movement for many years. The Movement has dispersed on charges of being “foreign agents” and now acts as a non-registered NGO. Besides, Lev Ponomaryov is involved into activities of two more organizations labelled as “foreign agents”, the association of lawyers who provide human rights defenders with legal aid Hot Line and the Foundation to Protect Rights of Prisoners.

Lev tells, “As for myself, I am still unaware what kind reports I should submit as an individual “foreign agent”. What I have done so far is to preface all my posts or publications with the disclaimer which I find disgusting”. Lev Ponomaryov has also decorated his photo on the Facebook account with the yellow star.

Lev Ponomaryov is certain that the decision to add him on the list of “foreign agents” is nothing but an act of revenge from the FSB. “I have expanded the scope of human rights work as my organizations have provided people, including those who are persecuted for political reasons, with assistance in organizing public campaigns”.

Alexander Peredruk, a lawyer with the Agora International Human Rights Group which represents four people out of the five labelled as foreign agents, says:  “Three of our clients are journalists while Daria Apakhonchich is not.

We are still unaware on what ground the decision was taken to choose these five people as foreign agents. The Justice Ministry published the list, but they fail to provide the motivation part of their decision. We all are taking the cases to the court to be appealed. None of our clients agrees to be labelled as a foreign agent. They regard the measure as an attack of freedom of press as well as interference into their life.

Their life is getting pretty much tougher under these circumstances. They are to register themselves as legal entities within a month from the announcement by the ministry. It means they will have to submit quarterly reports both as individuals and legal entities.

What it would mean? For instance, each shopping to buy food would lead to compiling the report on the money expenditure with all the receipts being submitted for inspection. Each and every public post in social media requires a disclaimer that it is written by a foreign agent. In case they fail to do it, they are threatened with the first fine to up to 10 thousand rubles (105 Euro), then the second would be 50 thousand (525 euro) and in case they are found to be inveterate troublemakers, the fines reach almost 1000 euros.

It is necessary to note that the system might consider failure to preface each post with a disclaimer as a separate violation. Thus, you, for instance, have ten posts without the disclaimer which means ten administrative cases each of which is punishable with 100-euro fine. Just multiply 100 by 10, how much would you get?

But the worse developments are expected from March 2021 as the amendments to criminalize such offences are enforced.

As for the ways to influence the situation, we are all looking forward to the first decisions by the ECHR on the previously submitted cases from organizations declared to be foreign agents. As of now, there have been tens of such cases but there has not been yet any ruling.