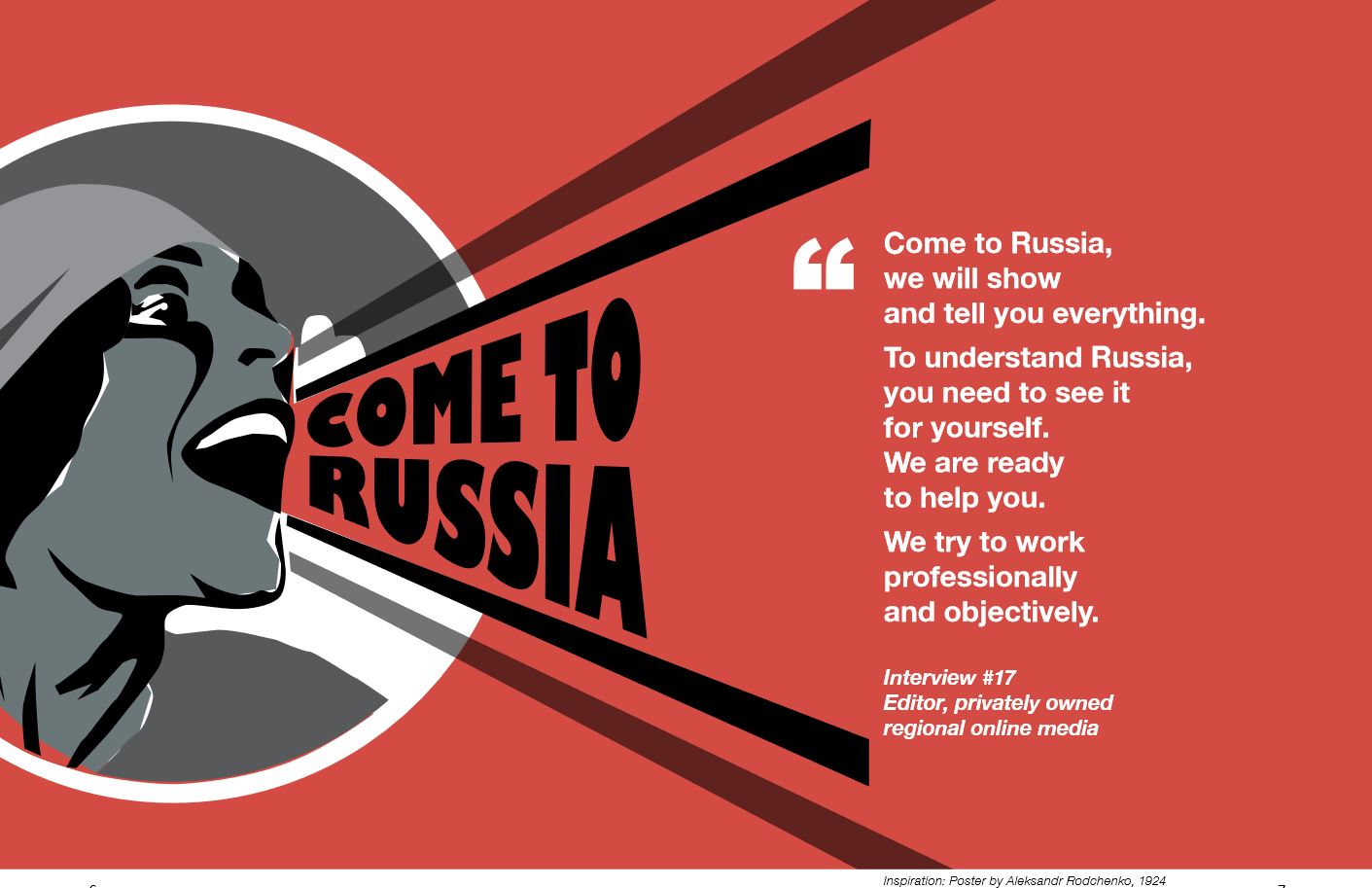 In the book Journalism по-русски 28 regional Russian journalists answer questions about how it is to work as a journalist in Russia, with regards to taboos, and what is allowed and what is not, according to Russian media law. Amendment of the Foreign Agents Law in December brought new challenges.

Journalism по-русски (Journalism In Russian) guidebook is a project accomplished by Barents Press, an NGO operating in the northernmost regions in Norway, Sweden, Finland, and Northwestern Russia. It is an alliance created by journalists and for journalists.

This cross-border project is essential in the current circumstances when politics meddles with freedom of press, when authoritarian tendencies overlap the boundaries of states. To counteract, it is necessary for journalists working in diverse circumstances to know and understand one another. The guidebook team included Swedish, Danish and Russian journalists. The motto of the project reflects on the beliefs of the team: “more journalism across the borders is vital in decreasing misunderstandings, fake news and the gap of knowledge between our countries”.

This simple thought is comprehensible for those who stick to the principles of responsible journalism, its six fundamentals: truthfulness, accuracy, objectivity, impartiality, fairness, and public accountability.

On the surface, the political relations between various countries are full of declarations of mutual friendship. A different thing is the political climate with its numerous laws, which often equal journalism to a threat to the state.

Tim Anderson Rask told of the research, “Our main goal was to enlighten the mainly western journalistic sphere about the complex situation of the Russian journalists. The goal was also not to paint this complex picture in black and white as it sometimes is done, but in as many colors as possible”. To ensure the multilayered picture to be as accurate as possible, the guidebook brought together “many different voices, from different media in different places in Northwest Russia”.

Barents Press has been working since 1994 in cooperation with journalists in the Barents Region. Tim asserts, “The knowledge about each other is the basis for sustainable working cooperation”. “What was striking is the small difference between the views of a journalist employed by a government-owned media and independent one. Or the frankness of the hopelessness of the situation many independent journalists find themselves in at the moment”.

The book is based upon comprehensive survey held among a representative group of journalists who work in the Barents area. It covers views and opinions of journalists who work for both independent, state, and private media channels. There are 28 chief editors, journalists on permanent staff of the outlets as well as their freelance colleagues from various media channels in Murmansk and Archangel Regions and Karelia. All of them responded to a broad set of questions anonymously.

The analysis of the atmosphere in which journalists in Russia operate draws a clear point that it matters little if a journalist is on the staff or freelance or whether they work for an independent or state or business-owned media outlet. They are still facing the same challenges and have to make similar choices.

Many speak not of the obligation to comply with the law but rather on their own ways to adapt to them. You cannot influence the choice of words by readers who want to leave their views in the comment section. Then there is a dilemma either to have a full-time moderator or rather disable the comment section. A journalist working with the private owned TV Company shares his memory of the first day when the Law on fake news came into force that happened a few days before April 1. “We stopped joking that day. Though the lawyers say the law does not forbid joking”, he shared.

The interviewed journalists share the same view on self-censorship stating its increase. “We play safe smoothing the corners, trying to protect ourselves and avoid obvious statements, even when we hold all the facts”, tells the editor of a privately owned national newspaper. Journalists find it extremely difficult if not dangerous to cover rallies. “Slogans and shouting can easily turn into slander, contempt and fakes”.

In some cases, restrictions forced journalists and their media outlets to not even think of submitting their articles to professional contests. Thus, one editor refused to participate in the contest for articles about the suppression of extremism because they “were not sure which phrases we can be crucified for”. Other prefer not to even mention any organization from the extremist list compiled by Roskomnadzor (The Federal Service for Supervision in the Sphere of Telecom, Information Technologies and Mass Communications) as “there are too many of them”.

Anna Kireeva, a journalist from Murmansk who carried out all interviews with journalists for the guidebook, tells, “Our colleagues in the Northern Europe pursuing the best of the best intentions were offering tutoring in journalism lacking understanding of the reality we are all facing. It was how the idea of the guidebook was born. We decided to provide our colleagues in Europe with concrete examples of various limitations so that they could answer a simple question: how they would personally behave if they were in our shoes…”

One of the journalists interviewed for the book tells, “There’s a feeling that we do not fight for our rights. Our Western colleagues are probably wondering why we tolerate that and continue to work under such conditions. It would be very curious to imagine our foreign colleagues in our shoes. I don’t think many of them would become heroes or fighters for the rights and freedom of speech with the risk of losing a job, an apartment or social guarantees”.

Anna Kireeva also tells of her own bewilderment with the depth and similarity of problems journalists are facing. “Once journalists who have been part of the survey got the final result for their verification, they found it mesmerizing to actually identify themselves under each number of interviews as the cases they described were so much alike”.

Anna expresses her deep appreciation with trust and openness with which her colleagues working in different regions and media of various types met her”. Anna conducted all the interviews personally, meeting people either at their offices or in a quieter place when they wished so. “I met many of my colleagues the first time for our interviews. What was similar was the readiness my colleagues demonstrated to contribute to the guidebook”, she concludes. Anna is certain that the positive attitude towards the project as such from the Russian side was thanks to the trust the Barents Press has gained in the area. “People were aware that the information they shared with us won’t be misused”. Besides, Anna tells, even her Swedish colleagues with the Barents Press do not have personal details of the journalists who took part in the survey. “It was crucial to keep all the personal data out of reach to ensure that our colleagues feel at their ease while speaking”, Anna states.

Anna Kireeva also tells that she has received a vast amount of responses from journalists in Russia who express their gratitude and appreciation with the accomplished project. “Unfortunately, we have not received many responses from western journalists so far and that is what we are really looking for”, Anna asks to request.

Anna Kireeva tells, “I personally know one of the five people who all of a sudden were branded “foreign agents” on December 28. The decision to include five people on this list has a truly chilling effect. This is a threat against anyone. It is not clear how the decision is made, which body actually decides on it, how to appeal it and whether it is possible to remove the name off the list.”

Anna explains that under the previous version of the law on foreign agents, it was necessary to prove that the organization operates without any foreign funding for one year to be taken off the hook. “As of now, it is all completely different as journalists do often write for media outside Russia and receive money for their work. Thus, the mere fact that you are a recipient of the payment for your article can be interpreted as “serving interests of a foreign state.”

Answering the question which region showed more freedom among their journalists, Anna Kireeva told that it was Karelia. “For some reason, she stresses, journalists there are not affected by self-censorship like in Murmansk or Arkhangelsk. There was even one editor who told in the interview that there is no topic a good journalist would not be able to tackle. If it is sensitive, it is necessary to find a way to raise it but not to silence it”.